The origins of the F.lli Pisoni Distillery 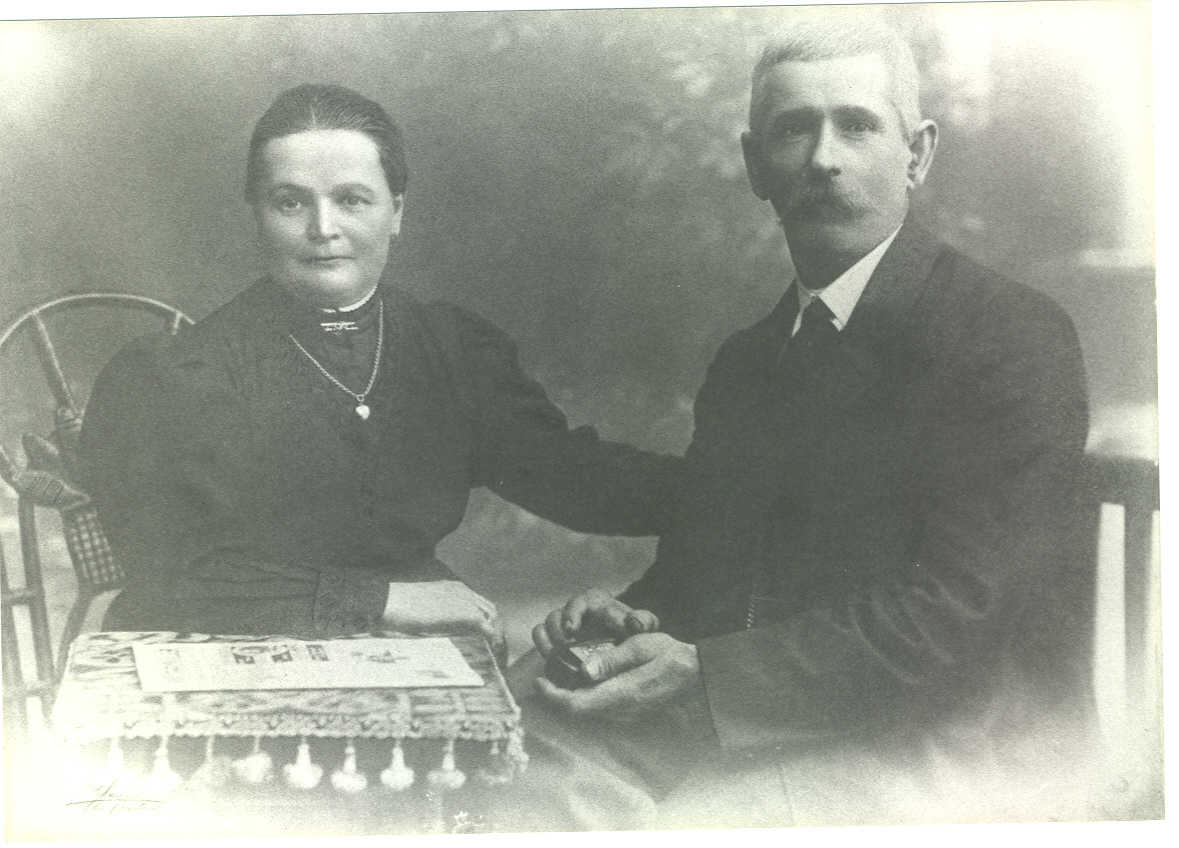 The origins of the F.lli Pisoni Distillery fade into the past beyond all memory, as wine making has always been a tradition through all the generations of the Pisoni family. There are records dating back to the Council of Trent (1545-1563) that mention a Carlo Antonio Pisoni as the official supplier of wine and spirits to the court of the Prince-Archbishop, Cardinal Cristoforo Madruzzo.
The photo shows Baldessare Pisoni (1850-1913) and his wife, Angela Poli (died 1925), who married in 1876. The first years of the Twentieth century were serene. These were the years leading up to World War I. Storm clouds approach.
On 28 July 1914, Austria-Hungary declared war on Serbia. On 31 July, a general mobilisation of the army was ordered, and mass conscription was announced. Baldessare Pisoni's family was busy making hay in Lagolo.
Baldassare died just before the great war, and in 1914 all seven of his sons were called to the front, to fight with the Austro-Hungarian army. And so, Father Luigi (1877-1950), Giuseppe (1880-1960), Francesco (1882-1948), Biagio (1885-1961), Eugenio (1887-1914, died on the front), Father Vittorio (1891-1967), Oreste (1894-1973) and Giulio (1895-1973) all went off to war. Even the family's two horses, Derna and Tripoli, also conscripted, were called to the front.
In Lasino, in the Pisoni family's patriarchal home, only two women remained: the mother, Angelina, and her only daughter Maria (1879-1952 - "Aunty Maria"), who never married and remained constantly beside her two brothers who became priests.
The two women also had their own battle to fight. They were not discouraged. Maria immediately learnt to manage the only remaining horse, to control the cattle, and to manage the workers they were forced to hire in the meantime. They harvested the grapes, the corn, the potatoes, and the turnips. And the war continued...
Spring finally arrived. They had to think of the crops to sow, of the silk worms, and again of the harvests, the grape harvests, and making grappa - which at the time they called "acquavita". A year went by this way, then another, then another... for four years. Acquavita was considered so important at that time that Emperor Franz Joseph "graciously" allowed his subjects to produce it freely, for family use, without paying any taxes on it.
In November 1918 the war ended. Even in Lasino the news was welcomed with great joy. Life slowly returned to normality.
Of the eight that went to the front, only seven sons returned to Baldessare Pisoni's family. Eugenio was forever lost in Galicia. The family waited for him in vain for years, under the illusion of his possible imprisonment in Russia.
And, with their new-found peace, the Pisoni brothers dealt with their new lives, each according to their own vocation and skills.
Brothers Oreste and Giulio continued the path their ancestors had begun in the agricultural sector. 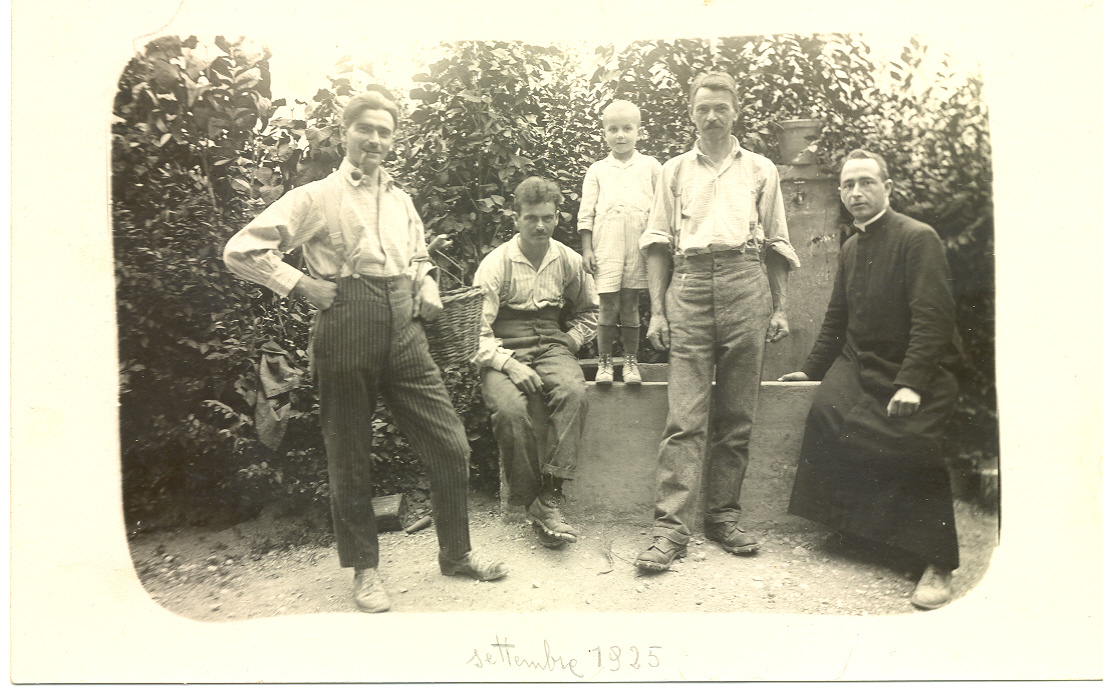 The years following the First World War saw the development, at Masi di Lasino, of a new agricultural commitment for brothers Oreste and Giulio Pisoni.
The war left a deep scar in the souls of the two brothers from the mountains. Having left young to face the war, they returned as full-grown men.
A lot of work awaited Oreste and Giulio. They had to take a farm that had been neglected - by necessity - for a long time, and get it up and running again.
The new technologies they had learnt at the Agricultural School in San Michele all'Adige - before leaving for the war - proved invaluable. First and foremost, they worked on the farm in Lasino. They dedicated their time to the fields, the vineyards, and the stable. They refurbished the wine cellar and the small distillery. But they also dedicated a lot of work to the agricultural property located at Masi di Lasino (the area now known as Pergolese). Oreste and Giulio went down to "Sarca" every day, early in the morning, and return to Lasino in the evening, together with a large group of other farmers.
In 1926, Oreste married Bianca Pisoni of Calavino, and in 1927 Giulio married Erminia Segalla of Vigne di Arco.
In 1927, they moved to Masi di Lasino permanently. Oreste and Giulio's two families went to live in the old residential hamlet, next to the mountain, which they had suitably refurbished.
The great financial depression of 1929 had a particularly heavy impact on the lives of Oreste and Giulio. During an initial phase of deflation - in exchange for raw materials purchased at specific prices, and investments in structures - prices for the finished product dropped rapidly. Calculations failed. Nobody was buying anything, because nobody had money. The subsequent period of inflation within the context of the crisis improved things a bit. And even the debts, little by little, were paid off.
The great depression passed, and life on the Pisoni farm returned to normal. The company, which had always been a single unit, found natural and accentuated diversifications as it kept growing: cultivating the fields, running the wine cellar, and running the distillery. Each member of the Pisoni family was capable of interacting within each individual sector. This was the company's great strength. Oreste preferred the agricultural business, Giulio was happier with the management of the company - in administrative terms - especially as concerned the wine cellar and the distillery.
When the Second World War began, with Hitler's invasion of Poland on 1 September 1939 (Italy engaged in the conflict as it declared war on England and France on 10 June 1940), the Pisoni family at Masi di Lasino were not called to fight. Oreste and Giulio were too old, and their children still too young.
During the Second World War, Oreste had six children: Angela, Lucilla, Vittorina, Gino, Franco, and Lodovica. Cecilia was born later. Giulio had four children: Enrica, Arrigo, Vittorio and Giulia. The two families lived under the same roof, and at lunchtime and dinner time they sat around the same table.
Arrigo - who at the time was only a little boy - would later clearly remember the coming and going of cartloads of marc drawn by horses, mules or oxen, and the despair and anger of his father Giulio and his uncle Oreste on finding - in carts coming from all over, and especially from the Giudicarie area - small lots of marc, dried or mouldy, rotten or acescent, that these poor farmers sent to the authorised distilleries.
In spite of the hard times during the war, the families of Giulio and Oreste Pisoni carried on in reasonable serenity. They did not suffer hunger, but they did not prosper either. Polenta was their staple food. Sometimes, the American and English bombers flew over the area, dropping their deadly load. As a precaution, a small air raid shelter was built in the rock next to the distillery. Years later, it became a large and cool cellar, ideal for spumante.
Among the cousins and siblings, natural affinity developed in school, at work, and while playing. In particular, Gino and Arrigo became inseparable. They had many interests in common. They have been always together at school, at work, and in their professional endeavours. 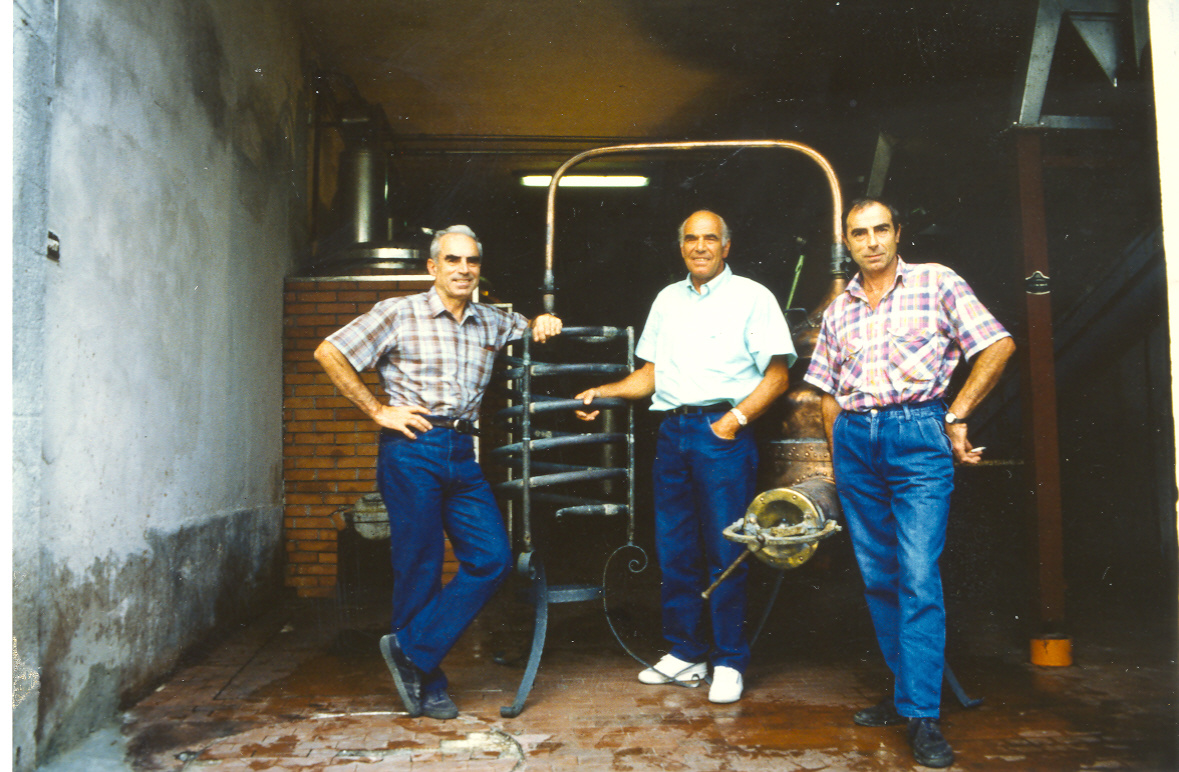 Gino and Arrigo were both born in 1932. They both attended the elementary school at Masi di Madruzzo (which was what they called Masi di Lasino at that time), and in Condino, where their uncle, Father Luigi, took them in. Vittorio - Giulio's third child - was born in 1935.
A few years later, Gino, Arrigo and Vittorio all attended the Agricultural School in San Michele all'Adige. Gino and Arrigo finished the agricultural school in 1949, Vittorio in 1954.
They began an intensive campaign to re-organise the fruit orchards and vineyards. The first specialised fruit orchards and vineyards were established. The old varieties of grapevine were eliminated, and replaced with new types. Space was made for Cabernet, Merlot, and Chardonnay (which was known as "Borgogna giallo", yellow Burgundy, at the time).
New products were studied and created. Wine - which until then had only been sold in bulk - was bottled. New kinds of grappa and acquavite were created. Containers and packaging was renewed.
The still was refurbished in 1935, and was very modern for its time. Entirely in copper, with naturally directed flame, it was equipped with a distillation column and counter. It was therefore possible to distil as much and as often as one wished, and even all in one process.
Beforehand, it had been inside the wine cellar and had a "daily amount".
The old still was refurbished and extended in 1968, during work for the construction of a silo and other service facilities.
During the 1960s, the company underwent another growth spurt. The new generation, under Gino, Arrigo and Vittorio, with increasingly precise and ample duties, contributed to this growth.
The notions and experience acquired in their years at the Agricultural School of San Michele all'Adige were put to good use. And, as happened in the past with their parents, the new company management under these three entrepreneurs was characterised by further diversification of their duties, while all three maintained the ability to interact in each sector: the fields, the wine cellar, and the distillery. This is the philosophy - as we have already mentioned - that has always been at the foundation of the company's activities, giving it its strength.
Gino therefore mainly managed with the vineyards and fruit orchards, while Arrigo looked after the distillery, and Vittorio dealt with clients, transportation, and shipment of their produce.
All other activities - concerning livestock, cereal crops and forage crops - were abandoned. 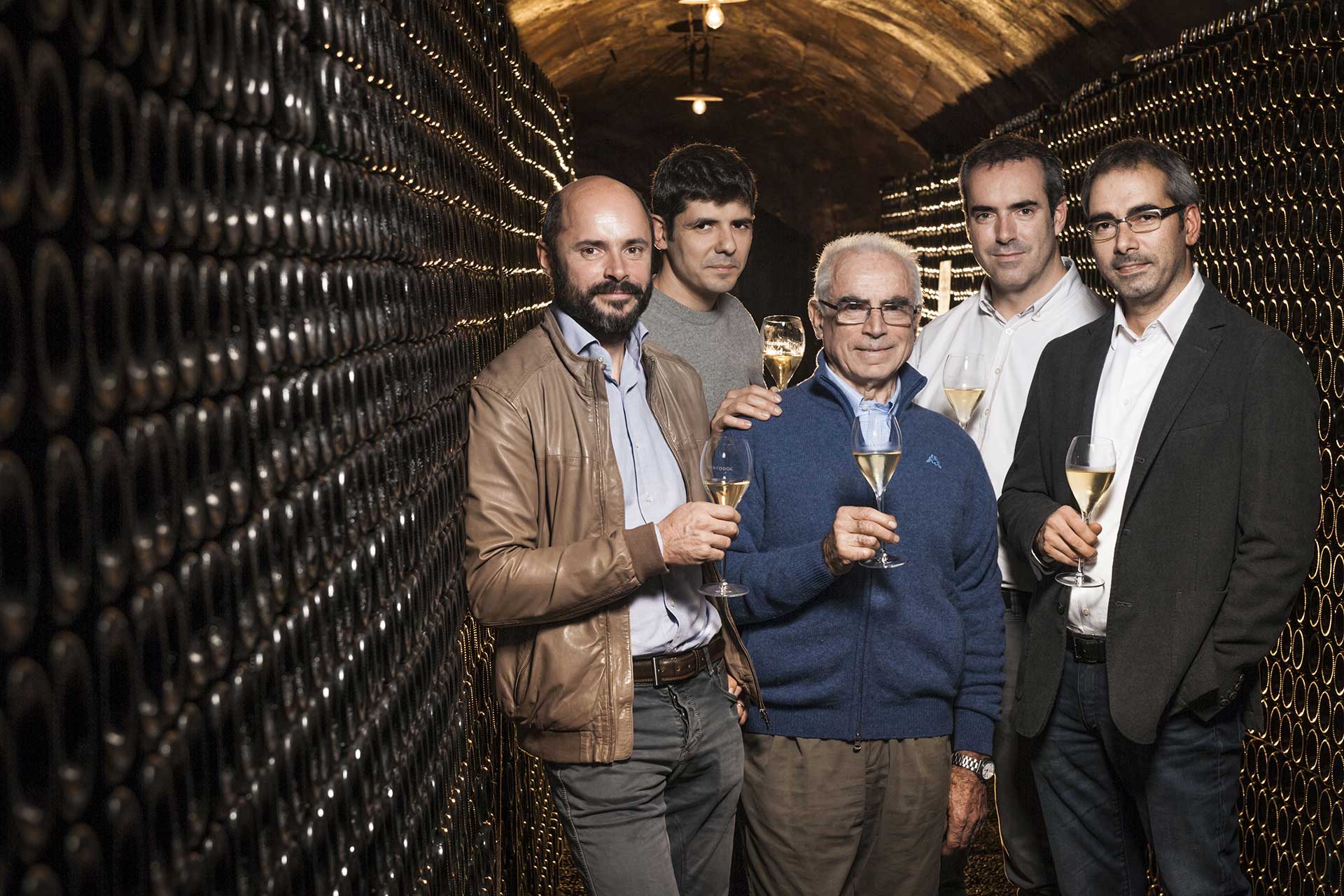 Between the 1990s and the early 2000s, the two sons of Arrigo(who is still in the company), Elio and Giuliano, together with Vittorio's two sons, Andrea and Francesco, took the reins of the company.
In the early 2000s, the company underwent a radical transformation of its facilities.
In 2004, the new distillery was inaugurated and, on the same occasion, the company celebrated 150 years of business. An important milestone for the Pisoni family, but also a new starting point: a radical renewal of the distillation systems, located in the new wing of the enterprise, fruit of the extension on the existing warehouse building. The new and modern system enables to further improve the quality of the grappa that is produced, as well as the quantity of marc distilled.
All of the four young members of the Pisoni family have earned a university degree and worked and studied abroad.
Each one is now in the company with a specific role.
Elio, who has a degree in business, follows the administrative part and the foreign trade sector.
Giuliano, who has a degree in material engineering, deals with the part concerning the production of grappa, liqueurs and distilled products, and takes care of the productive structure, the distillery, the bottling lines, and the company vehicle fleet.
Andres, who has a degree in Nutritional Science and Technology, is in charge of the sparkling wines sector. Under his careful and skilled leadership, we create our prized Pisoni Trento DOC traditional method sparkling wines.
Francesco, who has a degree in applied cognitive psychology, deals with the commercial part of the business in Italy.
In recent years, new products have been created, and the commercial network has been extended, by relying on a network of agents, which has grown constantly over the years. At the same time, our turnover from foreign customers has increased. Pisoni products are available in various countries all over Europe, as well as in the USA and Canada.
The Pisoni family has come a long way, over 3 centuries of history, overcoming two world wars, a serious financial crisis in the 1930s and one that is just as serious, which started in 2007 and has not yet come to an end.
Our corporate philosophy has always been based on small steps, on always pursuing a policy based on quality, as has been certified for 10 years now by DNV (Det Norske Veritas), in compliance with standard ISO 9001-2008.